Clay Matthews on the cover of SI 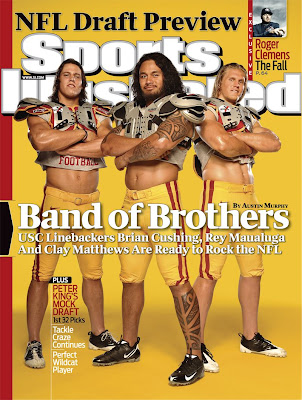 This kind of cover is the dream of most football players and Clay Matthews hit the jackpot when appearing on the April 2009 edition. He stands confidently aside fellow USC teammates Brian Cushing and Rey Maualuga who all were all expected to be drafted early on. Clay Matthews was selected as the 26th overall pick--not too shabby for an often described "late bloomer" who was physically undersized until bulking up his senior year in high school.

I think that Clay Matthews appreciates the attention. With long blond locks, chiseled features, and a statuesque build, Matthews looks like a Roman general or English knight. "Even the water droplets flung from my full-bodied hair are beautiful."

So whether you tune in to the Green Bay Packers because of their great skill or because Clay Matthews resembles a Nordic god... 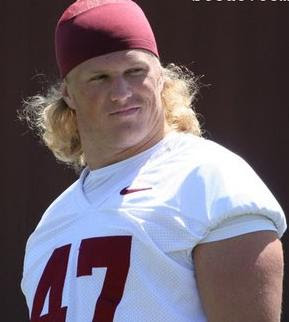