When Green Bay Packers head coach was asked about Donald Driver he said, “Here’s a guy that’s gone through a lot, but he’s always worked hard. From the first day I met him you could see in his eyes that he was going to do whatever it took to be a great player. It doesn’t surprise me, the success that he’s having, because this guy’s given so much and put in so much time. He deserves the success he’s had. It’s an amazing story.”

Donald Jerome Driver was born in Houston, Texas on February 2, 1975. Donald grew up in poverty during his younger years. After his father went to jail and they lost their home, Donald turned to stealing cars and dealing drugs to feed his four other siblings. When his mother was unable to buy a hotel room they lived in the back of a U-haul truck. At the age of fourteen his family decided to send Donald to live with his grandmother. There he attended Houston’s Milby High School. Donald Driver excelled in football, baseball, basketball, and track.

Donald Driver received an athletic scholarship to attend Alcorn State. Again he excelled in football and track and field. His seven-foot, six-inch jump would have qualified him for the 2000 Sidney Olympics. Donald received the conferences ‘Athlete of the Year Award’ three years in a row. Driver left Alcorn State with 88 receptions for 1,933 yards and 17 touchdowns.

In the 2009 season, Donald Driver added to two new team records. The season was Donald Driver's seventh season (sixth consecutive) to go over 1,000 yards. Donald Driver started all 16 games and totaled 70 receptions and six touchdown catches. Driver also became the Packers all-time leading receiver in catches. During Super Bowl XLV, Donald Driver was injured and had to sit on the sidelines as the Packers went on to beat the Pittsburgh Steelers 31-25. 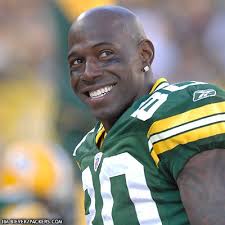